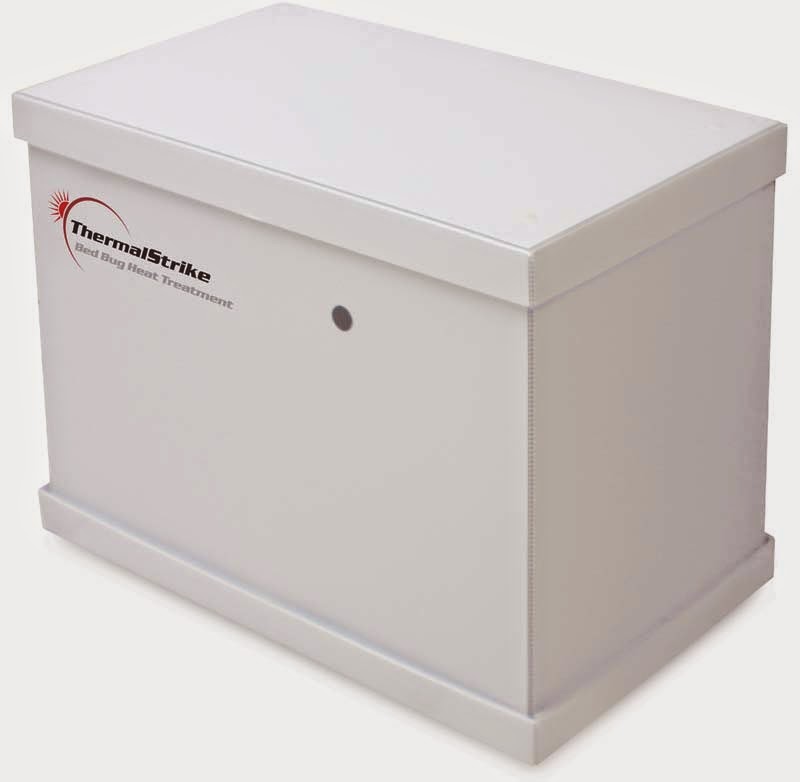 The flexible, electrical conducting strip at the top of the heating element can break at the corners after multiple setups, posing an electrical fire hazard.

Consumer Contact: PAB Two toll-free at (866) 470-1755 from 9 a.m. to 5 p.m. MT Monday through Friday or online at www.thermalstrike.com and click on Important Product Upgrade at the top of the page for more information.

Report an Incident Involving this Product

This recall involves the ThermalStrike Expedition bed bug heat treatment system. Consumers place items inside the system to kill bed bugs that may be in the items. The system is made of white, corrugated plastic and has four pieces: a base, a folding four-panel wall, a lid and a temperature sensor. The base and the walls are held together by hook and loop fasteners. When assembled, the unit is a box 31 inches long by 18 inches wide by 24 inches tall. The rear of the base has a power cord and the female connector of a power cable attached. The insides of the wall panels have a heating element composed of black heating film connected to a white, flexible electrical conducting strip.  The male connector of the power cable is attached to the conducting strip and protrudes from the rear wall panel.  The system is energized when the power cables are joined and the power cord is plugged into an electrical outlet.  The words "ThermalStrike" and "Bed Bug Heat Treatment" are on the front of the unit. ThermalStrike is also printed on the heating element on the interior of the unit.

PAB Two has received four reports of the flexible, electrical conducting strip breaking, including one report of a fire in a unit and three reports of units sparking. No injuries or significant property damage were reported.

Consumers should immediately stop using and unplug the Expedition and register their unit online to receive an ASC Diagnostic Unit free of charge.  The diagnostic unit will immediately turn off the system when it detects a break in the conducting strip.

Bedbug Central, Bedbug Supply, Protect-a-bed, Univar, pest control companies and pest control product distributors nationwide and online at Amazon.com from December 2011 through May 2014 for between $189 and $199.

Full Story
Posted by Justice at 7:07 AM