Consumers should stop using this product, which is being recalled voluntarily, unless otherwise instructed. It is illegal to resell or attempt to resell a recalled consumer product.


LED Light Bulbs
Hazard:
The bulbs can overheat during use, posing a fire hazard.

The 120-volt LED bulbs, sold as 6- 8- and 9-watt bulbs (equivalent to 40 or 50 watts), were marketed under the brand names Definity, EcoSmart, Sylvania and Westinghouse. The model numbers A19, G25 and R20/PAR20 are found on the packaging and on the light-colored circular neck above the base of the bulb where the date code is also printed. The date code reflects the week and year of manufacture; for example date code L4010 was produced during the 40th week of 2010. The date codes listed below may have the letters "CH " or "MX " at the end. For example, date code L4010 can also appear as L4010CH or L4010MX. The date codes are:

Lighting Science Group is aware of 68 incidents of product failures, eight of which were accompanied by visible smoke or fire conditions. The incidents include damage to light sockets, melted fixtures, burned rugs/carpet/ floors, damage to a circuit and to a lamp. There have been no reports of personal injuries.

Consumers should immediately remove the bulbs from sockets and lamps and contact Light Science Group for replacement bulbs.

Various retailers including hardware and lighting and electrical supply stores.

full story
Posted by Justice at 2:20 PM No comments:

Email ThisBlogThis!Share to TwitterShare to FacebookShare to Pinterest
Labels: fire hazard, little time to escape a home fire, safety recall, this doesn't have to happen, why you need DeTech fire alarms

BrightLight Blankets Recalled by IdeaVillage Due to Burn Hazard 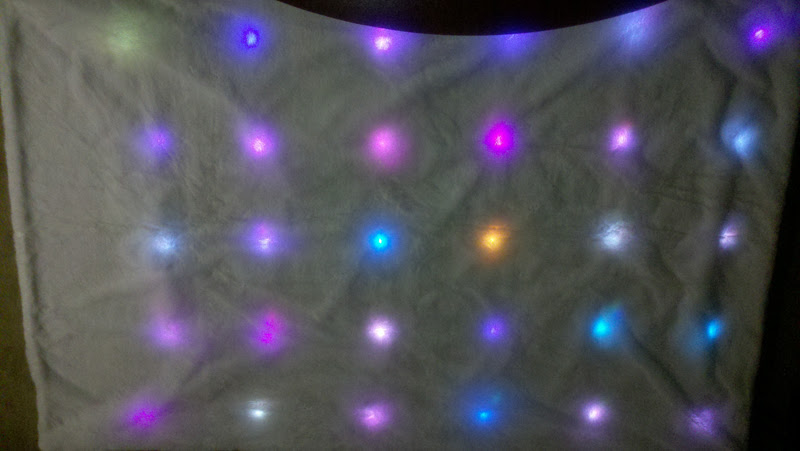 Name of product:
Battery-powered BrightLight™ blankets
Hazard:
The batteries in the blanket can overheat, p
Consumer Contact:
IdeaVillage, toll-free at (866) 655-4342, from 5 a.m. to 4 p.m. PT Monday and Tuesday, 6 a.m. to 3:30 p.m. PT Wednesday, 6 a.m. to 2:30 p.m. PT Thursday and Friday or www.brightlightblanketrecall.com for more information.
Report an Incident Involving this Product

The recalled BrightLight blankets are 40-inch by 60-inch white, polyester blankets with LED lights that change color. The blanket has a battery compartment in a zippered pouch on the edge of the blanket.

The firm has received four reports of batteries overheating, including one report of a minor burn to a finger.

Consumers should immediately stop using the recalled blankets and contact IdeaVillage for a free replacement blanket. IdeaVillage is contacting its customers directly.

Online at www.brightlightpillow.com and by phone from July 2012 through August 2012 for about $40.

China
Posted by Justice at 2:51 PM No comments:

Email ThisBlogThis!Share to TwitterShare to FacebookShare to Pinterest
Labels: little time to escape a home fire, safety recall, there is a solution, this doesn't have to happen, why you need DeTech fire alarms 
Hazard:
The pajamas fail to meet federal flammability standards for children's sleepwear, posing a risk of burn injuries to children.
Remedy:
View Details
Refund
Consumer Contact:
UNIQLO; toll-free at (877) 486-4756, from 10 a.m. to midnight ET Monday through Saturday and 11 a.m. to 11 p.m. ET Sunday, or at www.uniqlo.com, then click on ABOUT UNIQLO at the bottom left side of the page and then on UNIQLO NEWS for more information.
Report an Incident Involving this Product

The recalled products are one-piece micro fleece garment made of 100 percent polyester knit fabric. They were sold in infant sizes 9M to 12M. The pajamas are footed and have a front zipper and long sleeves. The brand name “UNIQLO BABY” appears on the neck label. There are a variety of colors and designs, including red and black plaid print; navy, green and yellow plaid print; off-white with pink, yellow and gray dots print; pink with off-white, dark pink and gray dots print; brown and pink with white snowflakes print; navy with white snowflakes print; gray with deer; beige with deer. The serial numbers of the recalled product, located at the bottom of the neck label, include: 187-074142(24-04), 187-074143(24-04), 187-074144(24-04) and 187-074145(24-04).

Consumers should immediately take the recalled pajamas away from children and return them to any UNIQLO store for a full refund.

UNIQLO New York stores, except the SoHo store; UNIQLO Garden State Plaza store in Paramus, N.J.; and online at www.uniqlo.com from September 2012 through November 2012 for about $15.

Full Story
Posted by Justice at 1:05 PM No comments:

Family: Uncle tried to save 7 from Ky. house fire 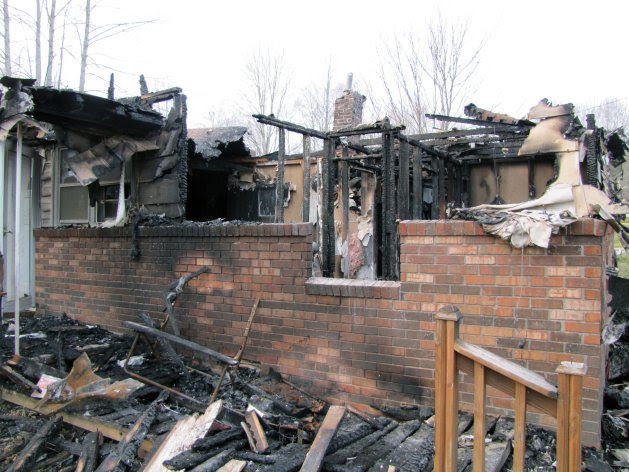 Associated Press/The Lexington Herald-Leader, Bill Estep - This photo shows the charred remains of a home after a fire erupted, Saturday, March 9, 2013 in Gray, Ky. Fire erupted Saturday at a rural Kentucky …more home, killing two adults and five children inside, a coroner said. Knox County Coroner Mike Blevins said Saturday afternoon that the adult victims found inside the ranch-style home were a woman and her boyfriend. The woman was the mother of three of the children who died, while two other children were from another family, he said. (AP Photo/The Lexington Herald-Leader, Bill Estep) less

GRAY, Ky. (AP) — As flames engulfed a small house in rural southeastern Kentucky, Gino Cima raced to the scene to try to save his nephew, his nephew's fiancee and the five children inside. The drive in the tiny town of Gray took just minutes, but family members said Sunday that Cima was too late — he reached a side door as the fire raged and pulled out the bodies of the two adults.

The fire killed all seven people in the ranch-style home Saturday. Officials on Sunday did not identify the victims, but family members said the children ranged in age from 10 months to 3 years. They said the woman who died was three months pregnant and was the mother of three of the children inside.

The other two children were siblings and friends of the family, visiting for the night for a sleepover, the relatives said.

Officials said the cause of the fire was under investigation. Arson investigators were at the scene Saturday, but officials said no foul play was suspected.


Laura Cima said she owned the single-story, wood-frame house that the couple was renting. She said they had recently moved in and were busy painting and getting carpets cleaned. They shared a bedroom in the back of the house, and Cima said the children were sleeping in a front room Saturday morning. She described an unused bedroom where she and her husband saw flames pouring out of a window when they arrived Saturday.

Gray is a few miles outside of Corbin, a city of about 7,000 in the foothills of Appalachia near the Daniel Boone National Forest and the borders of Tennessee and Virginia.

Shannon Disney, a sister-in-law of one of the victims, said the house that burned on Shady Brook Lane is surrounded by homes of family members — so many that the area is nicknamed "Disneyland." She said a relative who drove past the house at 7:45 a.m. noticed nothing unusual, but another who lives nearby saw smoke coming from it around 9 a.m.

Disney described the couple as devoted to the children, with their lives organized around bedtime and bath time. She said the woman had just gotten an ultrasound, and the couple was excited to plan for the birth, though they didn't know yet whether it was a boy or girl.

Disney called the house alive with kids, with the couple regularly pulling children on a wagon, pushing a tire swing or playing hide-and-seek. On Sunday, children's toys and a stroller were seen outside the house as a stream of people stopped by.


"Everybody is very heartbroken over it. Everybody knows the Disney family," said Amy Weddle, who was working Sunday at J&G Market, a popular convenience store where the couple and the children frequently stopped to buy candy and milk. "They're always good to everybody."

Weddle put a jar on the counter Sunday seeking donations to help pay for burial expenses. It had four $1 dollar bills in it Sunday morning.

State police said Sunday that no more information on the fire would be released until Monday.

Full Story
Posted by Justice at 10:34 AM No comments:

Email ThisBlogThis!Share to TwitterShare to FacebookShare to Pinterest
Labels: early warning detech fire alarms device, epidemic problem, fire hazard, little time to escape a home fire, there is a solution, this doesn't have to happen, why you need DeTech fire alarms

The Daily News
By CHRIS TOMASSUCCI
Staff Writer
IRON MOUNTAIN - A Kingsford family was pleasantly surprised when they received a phone call informing them they had won a nationwide drawing.

A Kingsford family has won $1,000 in a national drawing. Pictured here are, front row from left, Carrie Rundell and Flash the Fire Safety Dog. In the second row are Mackenzie Rundell, Olivia Rundell, and Lexy Rundell. In back are Landen Leslie, Peter Rundell, Linda Rundell, Anneli St. John, Forever Fire Safety employee; and Home Depot Store Manager Chris Boser.
The prize: $1,000 to spend at Home Depot.
Pete and Linda Rundell entered into the drawing at the Dickinson County Fair last year and had all but forgotten about it when the call came.

The drawing was sponsored by Forever Fire Safety, a fire safety company focused on educating families about fires and fire safety in the home. The company does educational programs for schools, churches, civic groups, fire departments and individual families across the country.

Leslie was happy to call and deliver the good news and said he was grateful it went to such a nice family.

For Pete and Linda Rundell the news couldn't have come at a better time. They had no trouble deciding how to spend at least some of their winnings.

"We found out just as our washer was on the brink," Linda said. "It was just perfect timing."

Full Story
Posted by Justice at 1:25 PM No comments: 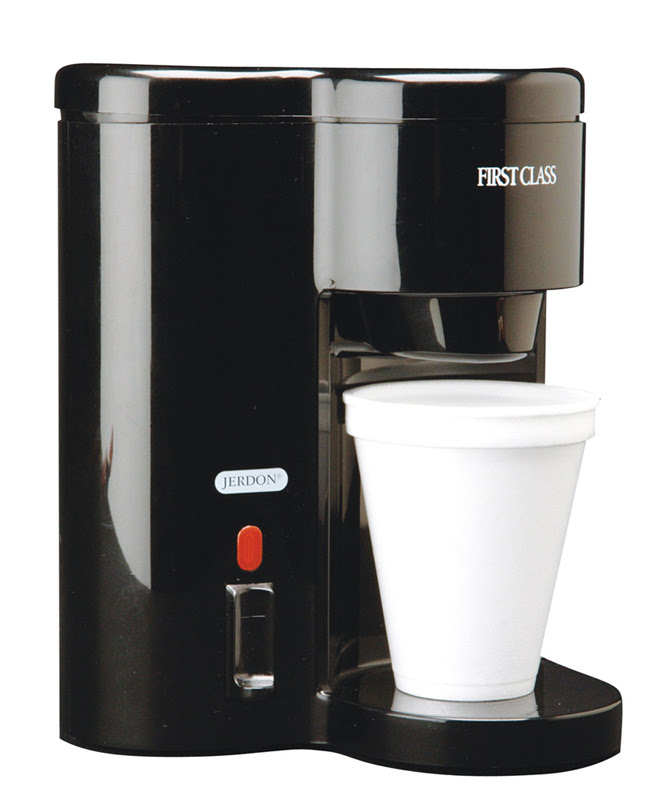 Jerdon Style; at (800) 223-3571, from 8:30 a.m. to 4:30 p.m. CT Monday through Friday, or online at www.jerdonstyle.com and click on “Recall Information” at the bottom of the page for more information.
Report an Incident Involving this Product

This recall involves Jerdon Style model CM12B one-cup coffee makers, with date code 1217. The coffee makers are black and have an oval, red indicator light above the on/off switch. The coffee maker brews a single, eight to 12-ounce cup of coffee. The phrases “FIRST CLASS” and “JERDON” are printed in white letters on the front of the product. The model and date code are imprinted on a nameplate located on the bottom of the coffeemaker.

Jerdon Style has received four reports of coffee makers overheating. No injuries have been reported.

Consumers should immediately stop using and unplug the recalled coffee makers and contact Jerdon Style for instructions on how to receive a full refund.

Hotel/motel product suppliers and major online retailers from July 2012 to January 2013 for between $15 and $26.

China
Posted by Justice at 1:10 PM No comments: